Planning a Remodel? Protect the Integrity of Your Architect-Designed Home 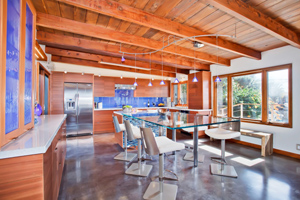 For a kitchen remodeling project we recently completed, a primary concern was protecting the design integrity of the original home, which was built by notable architect Loch Crane in 1952. Crane was artistic and creative from childhood and was inspired by the work of Frank Lloyd Wright. He was able to apprentice with his mentor for a short while until duty called him to serve in WWII. Crane flew B52s for the Army and stayed in Japan through 1946 where he taught advanced flight techniques and had the opportunity to study Japanese architecture and see how it was inspired by nature. When Crane returned from the war he finished his schooling and pursued architecture in earnest. “Building with one’s own hands is the essence of life,” Crane once said. He had a long and fruitful career, producing work influenced by his affinity for nature. “I want to turn to nature for my sense of belonging,” Crane said.

Our clients, the owners of a Crane designed home in a coastal community near the San Diego Yacht club, were aware of their home’s unique history and felt a deep respect for Loch Crane’s work. Their challenge was that the original kitchen was dated, dark and difficult to maneuver in, particularly when entertaining large groups, which our clients love to do. They wanted to update their kitchen with modern design and functionality that made a visual statement, while honoring the integrity of Crane’s original vision.

Working with our experienced architects, the clients were inspired to see the innovative solutions created in the design of a modern, highly functional and beautiful kitchen that respects the essential character of their home. Careful consideration was given to every detail. Here are just a few examples of how the original architect’s design was honored:

Because JDR is a unified team of architects, designers and construction professionals, our clients experienced the convenience of working with a group of experts all under one roof who were dedicated to the success of their project.