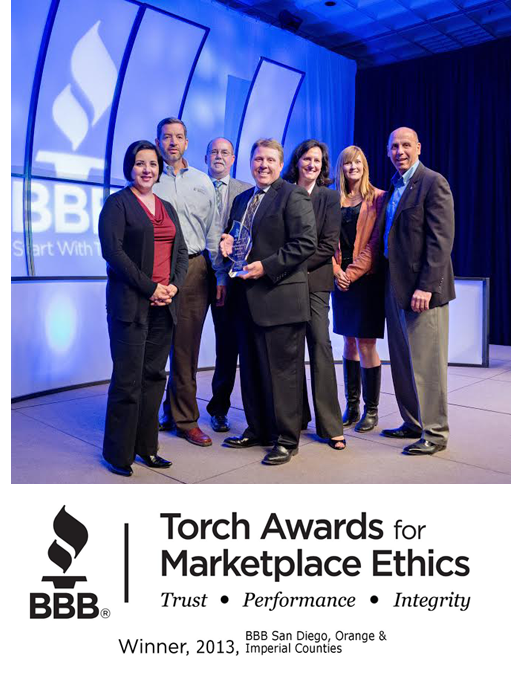 The Better Business Bureau (BBB) in San Diego, Orange and Imperial Counties named Jackson Design and Remodeling a winner of the Torch Award for Marketplace Ethics. The 2013 BBB Torch Award recognizes JDR as a leader in ethical business practices, conducting itself with the highest professionalism, integrity, and customer service.

Each year, companies of different sizes are selected through their local BBB’s regional competition to receive a Torch Award for Marketplace Ethics. JDR won in the 25-99 employees category. The 2013 award is JDR’s fourth consecutive Torch win, with awards earned in 2007, 2009 and 2011. Winning companies are only eligible to receive awards every other year, making this year’s award the company’s fourth consecutive win. Read more information about the awards here.

Todd Jackson, President and CEO of JDR said, “At JDR, we believe that we have a responsibility to conduct ourselves with integrity, honesty, and professionalism, and we weave these values into everything we do. I want to thank the San Diego BBB for honoring our commitment to excellence in these areas, and for recognizing the hard work of our outstanding team. We will continue to strive to be a leader in marketplace ethics in upcoming years.”