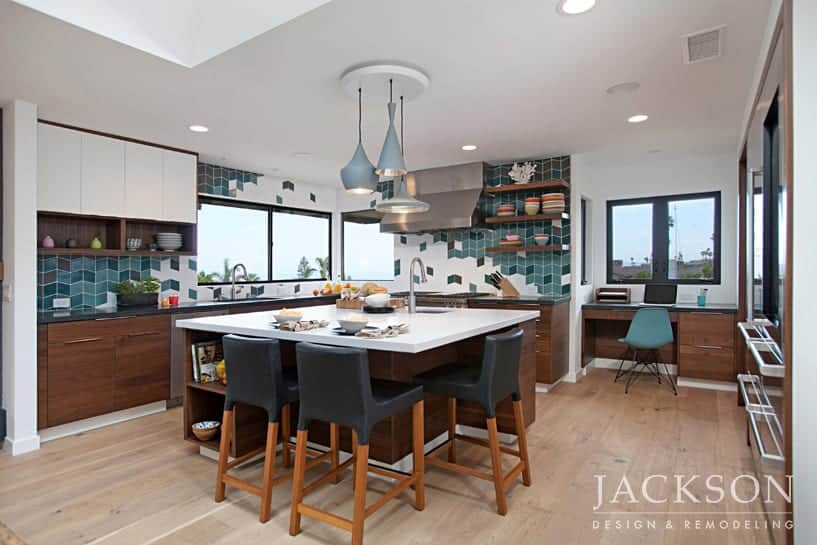 When a home overlooks the sea, highlighting the outdoors in the interior design is a natural inclination.

One house near San Diego had top-notch views of the Pacific Ocean, but its cramped layout and dark design seemed to disregard its beachside location.

“It was hard to tell that the home was even close to the ocean,” said designer Rosella Gonzalez of San Diego-based Jackson Design and Remodeling. “This was a challenge since the homeowners wanted an open and light-filled space connected to scenic natural surroundings and accommodating for an active family life.”

Using AutoCAD, Gonzalez redesigned the kitchen to be functional, highlight the exterior and embrace the clients’ love of mid-century modern design. The upper cabinetry and a peninsula were first removed, and a wall was moved back to open up the kitchen to the rest of the home. A formerly unused area was redone to hold a new pantry door, a refrigerator and a wine refrigerator, and an island was planned to replace the peninsula.

“The expansive island is defined with a trio of mid-century-inspired pendants in a fresh blue,” said the designer. “The island also allows for comfortable seating for three and contains a sink, ample storage and open shelving to display favorite cookbooks and pottery.”

Another functional change was for the original desk area, which the clients appreciated having in the kitchen. While the location of the desk was kept in the same position, Gonzalez included smart changes like efficient storage that matches the kitchen cabinetry to improve its style and function. The desk faces out of one of the new, larger windows, which now surround the kitchen perimeter.

“While some elements remain in similar positions to the original, new windows surrounding the corner reveal the ocean views and flood natural light into the space,” said the designer. “The kitchen, dining and living areas are now encompassed in an expansive, airy design with effortless views of the ocean and abundant natural light.”

To highlight the views further and emphasize their mid-century modern style, the clients asked for a one-of-a-kind backsplash. Both the homeowners and the designer experimented with different variations of tile designs before landing on the final composition – which is a mix of white, gray and turquoise parallelogram-shaped tiles.

“The variation in color and tile placement lends playful movement to the kitchen, enhancing a sense of harmony with the ocean seen through the windows,” said Gonzalez.

Dark gray countertops were chosen to balance the colorful whimsy of the tile backsplash. Natural wood cabinetry and white quartz countertops add to the mid-century modern appeal, while floating shelves in the upper cabinetry allow the homeowners to display their favorite dinnerware. The cabinetry also features minimalist pulls to refrain from visual distraction.

Like the kitchen, the existing master bath was dark and dull with a cramped layout and outdated cabinetry and fixtures. Instead, this young, professional couple wanted a luxurious and expansive bathroom retreat inspired by their home’s location.

“This was difficult as the cramped layout would not allow for an airy design,” said Gonzalez. “To make the space feel more expansive, the tub was removed and the space repurposed for an extra-large shower.”

The shower – now its own walk-in room past the vanities – boldly includes several types of tile, which are meant to invigorate the senses. The black hexagon tiles on the floor echo the tile on the main bathroom floor, while the niche repeats the teal backsplash behind the vanity. A back wall of white mosaic tile is a calming backdrop that unifies this bathroom with the others in the home.

“The main goal for this bathroom’s design was to bring the outside in,” said the designer, adding that a real tree trunk in the shower – which doubles as a bench – adds a feeling of connection to nature. “The shower window was elongated to enhance the ocean view and designed to align perfectly with the shower opening.”

The vanity connects to the outdoors as well with its natural wood cabinetry and white quartz countertop. Black floating shelves with brass detailing balances the bold black flooring and can be used to display collectibles and jewelry. Large custom mirrors framed in black complement the shelving.

“These reflective surfaces throughout the bathroom amplify light and make the space feel larger,” said Gonzalez, also pointing out the mirror on the door and the glass section of the linen closet door. “Each design element helps to make the once-confined bathroom feel spacious and tranquil.”