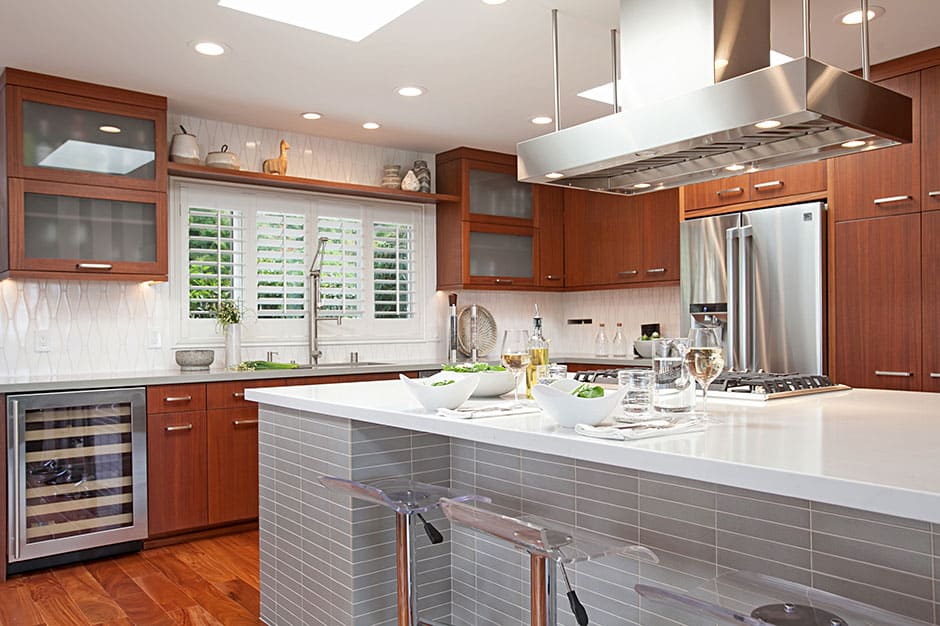 Older homes often have one outstanding feature that cannot be completely replicated in a new build: character. A couple living in a 1930s-dated house wanted to respect its original architecture, but they felt the space was old fashioned and did not suit their personalities.

“The clients wanted the kitchen to reflect their lifestyle – simple and practical,” said designer Marisela Contreras of San Diego-based Jackson Design and Remodeling.

As was typical in a house built in the early 1900s, the kitchen, living and dining room were all closed off from one another. In the kitchen, the cabinetry lacked useful storage, the sink was not centered with the window, and the island was too small to be useful as a prep area. In addition, the laundry room was located in the kitchen and took up valuable space.

“The biggest challenge was structural,” said Contreras, who used Revit for the architectural plans and AutoCAD for more detailed design drawings. “We wanted to completely transform the space visually while respecting the character of the 1930s home.”

“The homeowners loved the architecture of the house, the vaulted ceiling in the living room, the wood beams, the fireplace and the windows,” said the designer. “These original elements balanced with the new design to give the home a rich character and truly express the clients’ personalities.”

The pass-through from the foyer into the kitchen was closed off to make room for the refrigerator and oven, and the sink was centered with the window. The cooktop stayed on the island, but the island itself was extended to add seating and more storage.

With the kitchen now open to the dining and living room, the next challenge was making all the spaces more cohesive. Oak hardwood flooring with variation was installed throughout, and all the walls were painted white to brighten the now open space.

In the main cooking area, mahogany cabinetry was selected because the clients love the wood’s linear graining and its deep reddish tone. The perimeter and island countertops are both a neutral quartz material, which balances the color and veining of the cabinetry and other wood elements in the house.

To help define the main cooking area, the design team kept the range in the island. They also made the new island almost three times the size of the original, giving clients more counter space, cabinet storage and seating.

“This was the perfect opportunity to make the hood a focal point,” said Contreras, who explained that the large stainless steel hood above the island makes a bold statement because of its shape and size. “The island now feels like a natural gathering place in the expansive open design.”

The island itself is also eye-catching. Covered in horizontal, gray porcelain tile on the bar side, the piece adds another layer of texture to the kitchen.

“My favorite part of the project was seeing the transformation of the home from start to finish,” said Contreras. “While we preserved many original elements, we successfully unified the kitchen, dining and living spaces and created a more serene, beautiful and functional home for the clients.”

View the original article on the Kitchen and Bath Business Website »