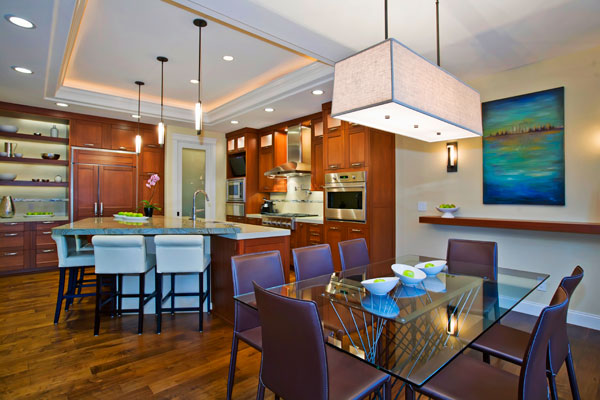 The two-story 1970s tract home had an obscured front door, a tiny cut-off kitchen and an awkward split-level floor plan.

The latter made it hard for the mother-in-laws to visit. That might be good news for some people, but for this Del Mar couple and their two teenage sons, it was a catalyst for remodeling.

They wanted an open, level first floor. So the homeowners, who wish to remain anonymous, hired interior designer Tatiana Machado-Rosas of Jackson Design and Remodeling to reconfigure the four-bedroom, three-bath 2,400-square-foot home into a five bedroom, four-and-a-half bath home, and adding 1,700 square feet.

The process, completed in June 2011, also turned the plain 70s exterior into a warm and welcoming façade with Craftsman-style touches, including stone accents.

“The original house was a rental most of its life,” the homeowner said. “It had some hard years.”

The foyer is now bright and airy with a gracefully curving stairway that leads up to the family’s bedrooms. The wrought-iron and cherry wood railing add an elegant touch.

To the left is the guest suite, designed with the elderly mothers in mind. The wheelchair accessible shower in the suite’s bathroom wall contrast with the dark porcelain floor, which has the look of slate.

Past the entryway, the home opens up, spreading out into the living/dining area and kitchen with views to the backyard and the Torrey Pines beyond.

“We wanted to continue the outside when you come into the house,” the homeowner said.

The living area is a combination of styles. The sleek, gray porcelain of the fireplace surround and the low horizontal lines of simple, modern furniture contrast with the warm Craftsman feel of the molding around the doors and windows and the dark-stained maple wood floors.

Tray ceilings define the living space and the kitchen. Each area has layers of lighting from indirect and recessed ceiling lights to wall sconces and pendant and cabinet lights.

The kitchen is anchored by an asymmetrical slab of wasabi granite, which functions as the breakfast bar. The asymmetrical shape allows the family to sit along two sides so they can see each other.

“The granite is an art piece,” Machado-Rosas said. “We didn’t want to cut it.”

The slab’s green tones and the rich mahogany of the cabinets tie in with the colors of the Torrey Pines outside. “It’s very organic, but not overwhelming,” Machado-Rosas said. “It’s very soothing.”

Cabinets, lights and the range hood as well as the iridescent tile strip in the backsplash are a play of vertical and horizontal lines. But while the geometry creates a visual balance, function was top priority. “We put a lot of thought into how to organize the kitchen,” Machado-Rosas said.

That thoughtfulness includes lots of storage space, a pot filler over the cook top, a Miele dishwasher that is so quiet it won’t disturb anyone watching television and a warming drawer that’s placed high enough so no bending is required. Form and function are also combined in the wine rack, which is inserted into a narrow wall. With a wrought-iron door, the rack has the feel of a wine cellar.

Glass pocket doors on the opposite end of the living room lead to a game room for the two boys. The doors cut down the noise but still allow the parents keep an eye on things. The room is still in flux. “We’re giving ourselves a year to figure things out, and to see what we want,” the homeowner said.

Upstairs, the master bathroom was expanded to include a roomy bathtub and large shower. “I absolutely love it,” the homeowner said. “The entire bathroom was the size of the shower.”

Clerestory windows provide natural light along with privacy, and the neutral tone of the porcelain tile on the floor and a portion of the walls give it a soothing feel. Light and dark vertical stone tiles over the vanity keep the neutral color scheme but create texture.

Wasabi granite also tops the linen drawers in the second-floor hallway, which overlooks the entryway below. Right outside the laundry room, it’s the perfect place to fold clothes and keep connected with everyone at home, the homeowner said.

It’s just another example of the home’s blend of aesthetics and function.