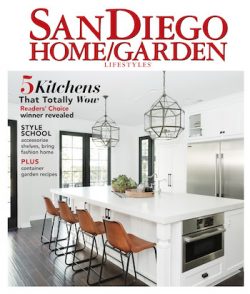 (SAN DIEGO – June 4, 2018) – Jackson Design & Remodeling (JDR) is excited to announce its Uniquely Bold” kitchen design for a young Ocean Beach couple is one of five winners in the 27th annual San Diego Home/Garden Lifestyles Magazine Kitchen of the Year (KOY) competition. This marks the third KOY award for Jackson Design and Remodeling, and its second consecutive win.

Designed by JDR Senior Interior Designer Rosella Gonzalez, the kitchen is a fresh and rustic take on a Mid-Century Modern sensibility. The bold handmade-tile backsplash in vivid shades of turquoise was customized with exacting attention to detail. Updated classics, such as a stainless steel hood and minimalist cabinet pulls, complement a balance of natural woods and gleaming white surfaces. The design captures ocean views and natural light while communicating colorful style in an open and airy layout.

“I am so proud of the design team’s work to transform this kitchen with fresh ideas the homeowners will cherish for a lifetime,” said JDR President and CEO Todd Jackson. “The design team skillfully balanced personal expression and efficient space planning to create a space that surpassed the homeowner’s expectations. We are honored to be awarded “Kitchen of the Year” for the second year in a row.”

Designers from across San Diego submit their best projects to this annual contest. Projects are judged by an independent panel of editors and design industry leaders. JDR is among a total of five Kitchen of the Year winners for 2018. The winning kitchen is featured in the highly anticipated “Kitchens of the Year” issue of San Diego Home/Garden Lifestyles on newsstands now.