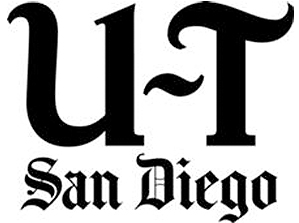 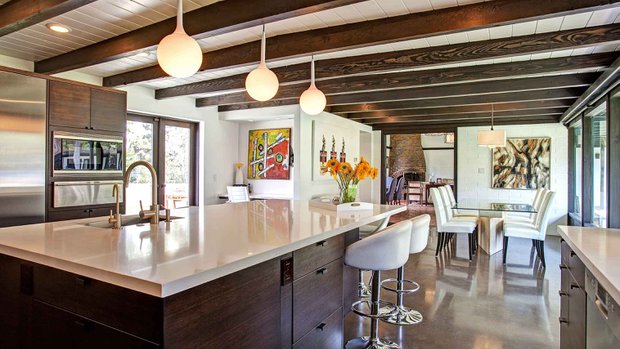 A large kitchen island with a white quartz countertop is surrounded by comfortable white leather stools. Jackson Design and Remodeling

The final season of “Mad Men” begins Sunday, April 13. Since its kickoff in 2007, the AMC series has helped bring 1960s design style back into vogue. Set in a midtown Manhattan high-rise, the offices of Sterling Cooper Draper & Pryce ooze the quintessential midcentury modern design trends that define an era. For today’s designers, midcentury modern design is focused on bringing a modern sense of practicality and functionality to the iconic vintage style that “Mad Men” has captured so well.

Our team at Jackson Design & Remodeling was contacted by a couple with a La Jolla Farms home built in the 1960s by noted architect Dale Naegle. We set out to significantly update the home to accommodate a family with children, while remaining true to the home’s history and classic design style.

It was important to our clients that we blend their divergent tastes while accommodating their school-age children. The home needed significant updating to accommodate the family. In the popular midcentury style of the day, the one-level home was originally built so that each bedroom was only accessible from the exterior corridor, as an intention to create an open and natural connection to the surrounding landscape. The remodel included the addition of an interior hallway, along with other structural changes and an exterior face-lift.

The neglected beauty of the original home, especially found in its original concrete flooring and bold beamed ceilings, was meticulously restored to give a feeling of expansive living. Although the entire interior of the home was remodeled with careful attention to materials, space planning and focal points, the kitchen and dining areas are strikingly clean and modern. We borrowed space from a bedroom and transformed some of the existing layout of the home, doubling the kitchen’s size. With the addition of white quartz countertops set against dark horizontally grained bamboo cabinetry, the kitchen shines. The contemporary island is surrounded by comfortable white leather stools and a trio of pendant globe lights, to offer the family an informal space for dining and entertaining. Modern appliances were meticulously placed throughout the kitchen to leave a more streamlined appearance, while an Italian Calacatta backsplash wraps the kitchen in luxury. Hand-selected slabs of dramatically veined marble were also selected for the stovetop. 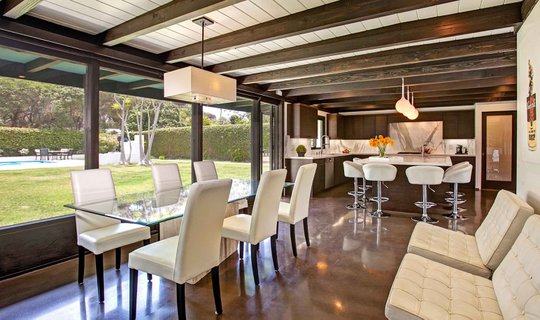 The midcentury home’s formal dining area is a natural extension of the kitchen. Jackson Design and Remodeling

The formal dining area is a natural extension of the kitchen. The original tongue-and-groove ceiling was kept intact but painted white to add a refreshing brightness to not only the room, but to the appearance of the rhythms within the beams. The dining room is furnished with a pair of vintage Barcelona chairs and decorated with pieces from the couple’s modern art collection.

The design of the remodeled home truly honors the past, while creating a comfortable and visually stunning home for the young family.

Tatiana Machado-Rosas is a senior designer with Jackson Design and Remodeling. She can be reached at (619) 442-6125, [email protected]; www.JacksonDesignandRemodeling.com