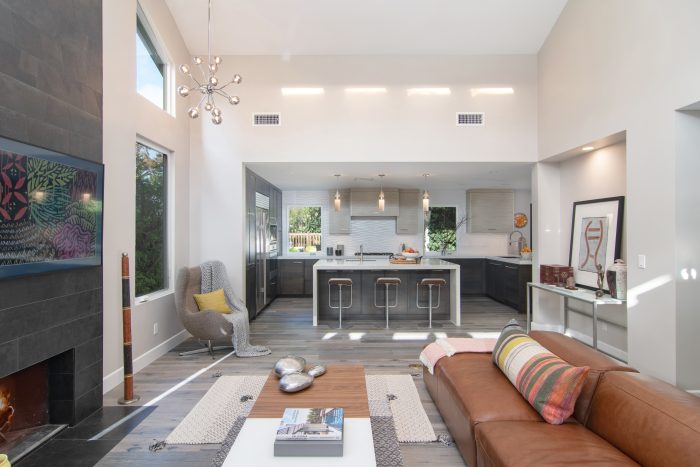 The location and “bones” attracted Chicago buyers to a San Diego home whose bland exterior hid its true potential. Reminiscent of a ranch on the outside, the 1970s house featured an Art Deco style inside with rounded columns and soffits, as well as arches between rooms. Unfortunately, those structures blocked the view to the backyard, and while the living room had skylights and a clerestory window, the rest of the house – including the kitchen in back – was closed off.

“The clients wanted the home to be more open and have as much natural light as possible like the front living room did,” said Alison Green, CKBD, who was a senior interior designer with Jackson Design and Remodeling (JDR) when the project was completed.

Although they brought some style ideas to the table, asking for mid-century flair with a modern touch, the clients were mostly absent during the renovation because they had not yet moved to California. In fact, Green walked the house with the residential designer David Hall and the project director but without the clients, which gave them the opportunity to brainstorm the creative ideas she would present.

To provide the open, light-filled home the clients wanted, walls, arches and columns had to go. Green and Hall discussed it with the rest of the JDR team, and in addition to removing walls between the formal living and dining rooms, they decided to flip the location of the kitchen and dining room. 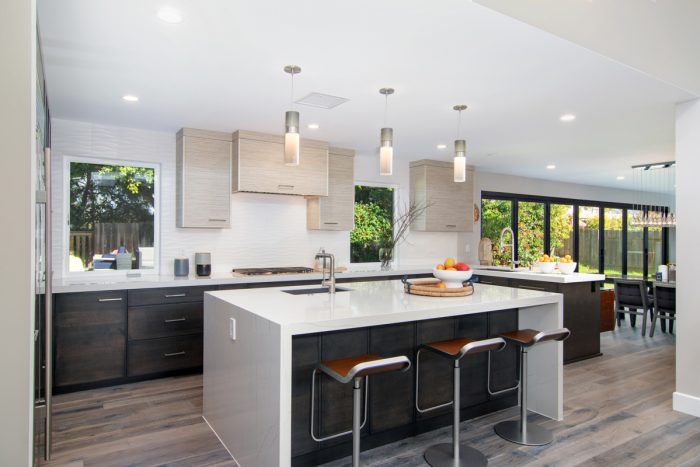 This change resulted in connecting the kitchen to the living space. Luckily, none of these elements were supporting walls, so the changes did not challenge the home’s structural integrity.

“We played with the idea of just removing the walls and keeping the rooms in their areas, but it really limited the kitchen storage, and it would have been more like a galley kitchen,” said Green. “It wouldn’t have given them everything they wanted, as far as appliances. Moving the rooms made it possible to include a large island and helped with flow and functionality of the kitchen being open to the living room, which is something they really wanted.”

Layout improved, Green and the design team worked with the clients on infusing the kitchen with their style and a warm palette, proposing ideas and getting their feedback from afar or during their monthly visits. Initially, she recommended all espresso cabinets, which she felt comfortable with because there were other lighter elements like the countertop and backsplash, along with plenty of light thanks to the new folding door in the adjacent dining area. But the clients thought it would be too dark, so she incorporated the light upper cabinets instead. That switch gave her a chance to add texture with laminate upper cabinets. A wavy 3D porcelain backsplash adds more interest. 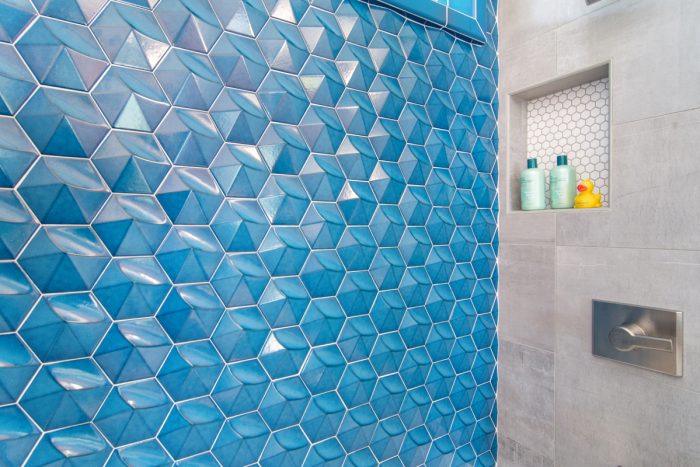 At the top of the home’s new floating staircase, the son’s bathroom would be a focal point of the second level. Here, cosmetic changes modernized the space and allowed for a fun blue tile in the shower – again incorporating texture with its 3D hexagon pattern.

“Almost everything else in the home is neutral, but when you come up the stairs and get to the top landing and this bathroom door is wide open, you see it,” said the designer. “So they knew they wanted that back wall to be something cool.” Other than the pop of blue, the bathroom reflects the home’s simple palette. Green kept the bathroom’s layout but chose a shorter vanity to make space for linen storage and a hamper.

Overcoming Difficulty in the Primary Bathroom

In this space, Green made few layout changes, but she met one significant challenge. “It was kind of a closet bathroom – a big jumble,” she said. “We needed to separate the closest from the bathroom, and they wanted a curbless shower entry.” Green closed off the closet with doors and added an entrance door from the bedroom to the bathroom. That was the easy part. 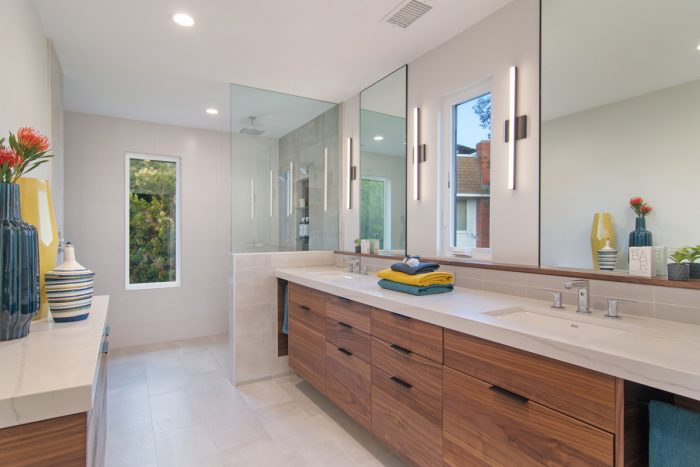 The designers were challenged by the client’s request for a curbless shower. On the second level of the home, the installers needed to get enough space in the floor to drop the linear drain at the end of the shower. It necessitated a big space to accommodate the slope, which meant Green had to create a soffit for piping in room below. A wall separating the shower and toilet area from the vanity was replaced with a pony wall and topped with glass to still demarcate the shower but keep the room bright. To add warm mid-century style, the designer selected walnut and gray porcelain. In the shower niche, the accent tile in antique brown brings in more warmth.

“We kept it seamless and simple,” she said. “I didn’t want a lot of color in there; it’s their sanctuary.” The clients benefited from the neutral palette that was used throughout the home because their art collection features bright colors. “The kitchen sets the tone – it has dark wood with white, but it also brings in warmth with laminate,” said Green. “You see this warmth in other spaces, and you see the white countertops in other spaces.”

Balancing the home clients want and the one they need is a designer’s priority and challenge. When the homeowners are present at intervals to make material selections and see the project progress, a strong relationship of trust between clients and the designer is a must.